Airports are humming again with COVID restrictions being lifted. That has John and Greg talking about commercial airline safety.

The focus of this episode is maintenance lessons learned from the American Airlines DC10 accident in Chicago. Greg was just coming on board NTSB when the investigation began and John knows several of the key players involved.

The DC10 involved had recently had maintenance done that required removal of the engine. The work compromised the pylon arm that comes out from the wing to the top of the engine. The engine fell off on takeoff just 10 days later.

John and Greg walk through the accident and key findings. They also talk about safety recommendations that were never implemented.

Photo: Elwood Driver of NTSB shows the nut and bolt that broke on American Airlines Flight 191, causing the engine to fall from the DC-10, May 27, 1979. Driver was holding a press conference at the Sheraton O’Hare Hotel, showing a fatigue fracture of the pylon bolt. (Don Casper/Chicago Tribune/TNS) 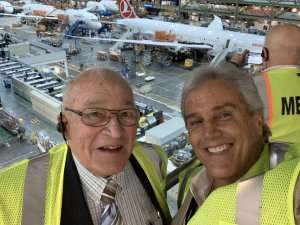 Become a Patron!
Scroll to top